If you have been arrested for a DUI in Atlanta, experienced DUI trial attorneys James “Skip” Sullivan and Bob Chestney are available to discuss your case anytime – including after-hours and weekends!  Call us at 404.816.8777

Here is a recent Tweet from the Atlanta Police Department:

Contrary to what has been on the news, the Atlanta Police Department has stated that the DUI Task Force has not been “disbanded” but rather reorganized, where highly trained DUI Task Force officers have been reassigned to each zone precinct to assist and train other Atlanta police officers in DUI detection.  Atlanta Police recently announced receiving a grant from the Governor’s Office of Highway Safety for a H.E.A.T. unit concentrating on DUI detection. Officers Mauricio Castro, Eric Ramsey, Joseph Varela, Chad Botte, and Jeremiah Brandt are part of the H.E.A.T./H.I.T.T. unit that is headed by long-time APD Officer Justin Brodnik. There are a fair amount of other Atlanta police officers that make quite a number of DUI arrests including Jeremy Jeffry. Atlanta Officer Garrett Rolfe, who was part of the H.I.T.T. unit made numerous DUI arrests in Atlanta, but he was terminated in June 2020 for shooting and killing Rayshard Brooks during a DUI arrest.  Officer Rolfe has now been charged by the Fulton County District Attorney’s Office with multiple offenses, including Felony Murder in connection with the death of Rayshard Brooks. In an interesting twist, Officer Garrett Rolfe is suing for false arrest. This development with former Officer Rolfe may affect his pending DUI cases in Atlanta and Fulton County State Court. If you have an open case where Officer Rolfe was the officer who issued a ticket, or he conducted an investigation, contact Chestney & Sullivan and we can discuss what possible outcomes may happen with your case and whether prosecutors may still try to pursue the prosecution of the charges against you.

Our DUI attorneys know how to investigate and challenge an Atlanta Police DUI Task Force/H.E.A.T. Team DUI.  One of the benefits of investigating 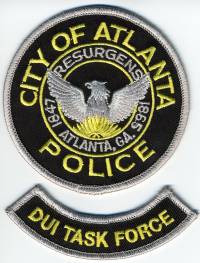 an Atlanta DUI Task Force case is that most of their patrol vehicles are equipped with video and audio.  Their video equipment has some features similar to a DVR or TVO that many people have at home for their TVs.   Their equipment is continuously recording, but will not preserve anything until the officer either manually activates recording, or the officer activates his emergency equipment (lights).  Then the video will preserved somewhere between 30 and 60 seconds of time before activation and typically the Atlanta officers will run their video until it is turned off when they reach the jail or their final destination.  Videos can be obtained or viewed through the court process.

To build a strong DUI defense in Georgia, our Atlanta DUI lawyers start by learning everything possible from the information you present.  Based on this core information, he or she can find more evidence by using specialized resources as needed to determine if all testing and other details of your arrest were accurate and legal.  This determination is the basis for a strong drunken driving defense in Georgia.  We have our own in-house investigator that gathers information, videos, 911 calls, possible surveillance videos, police reports, documents, road/scene conditions, and more.  There are times when we use the services of toxicologists, accident reconstructionists, private investigators, breath test/field sobriety experts, medical professionals, and video illustrators, to name a few, to help build a solid defense in your Atlanta DUI case.  Our Atlanta DUI lawyers analyze a case from the initial stop or reason why the police were involved, looks for suppression issues with the admissibility of field sobriety tests or state chemical tests (breath, blood, or urine tests), and develop strategies in how to best conduct license suspension hearings, preliminary/committal motion hearings and trial.  Our team approach is an effective way to ensure we have a sound strategy in defending your Atlanta DUI.

Can I just enter a guilty plea myself and avoid hiring a lawyer?

There is a saying that “a person who represents himself has a fool for a client.”  DUI cases are one of the most serious cases that are prosecuted in Atlanta Municipal Court or in State Court.  Even if you think you are guilty and may not want to fight your case all the way, there are matters that a skilled Atlanta DUI lawyer is better able to handle than someone representing him or herself.  Here are some reasons why you may consider hiring our Atlanta DUI lawyers rather than representing yourself: